Superbru goes head to head with SA Rugby magazine to see who will come out on top on Superbru during the 2020 Vodacom Super Rugby season. 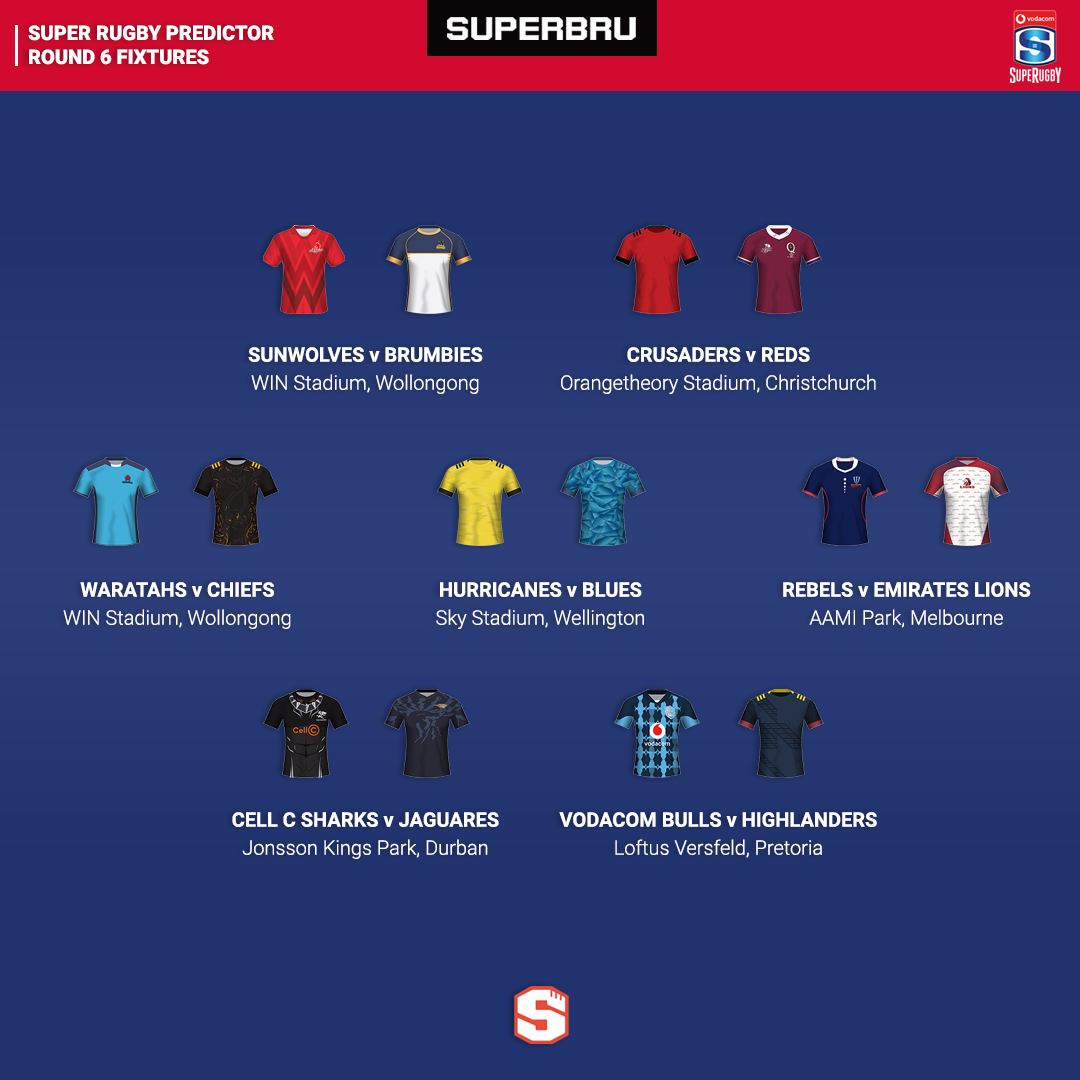 I’ll endeavour to be slightly less bullish after my round-five humbling, but this looks like an easy one to start with. It’s a home game for the Sunwolves, but it’s taking place in Wollongong rather than Tokyo and, fresh from a bye weekend, the Brumbies are strong favourites. Brumbies by 33

I wish every weekend started with an easy one. Only one outcome in this one. Brumbies by 30

And this is another easy one, with the three-time champions at home to the Reds, and having had an extra week to rest. The Reds haven’t been as bad as their results suggest, but there’s no chance I’m picking them again. Crusaders by 25

I cannot see the Reds troubling the Crusaders too much. A bonus-point win for the men from Christchurch. Crusaders by 23

It starts getting a bit trickier here. The Tahs managed their first win of the season last weekend, but how much of that was the Lions being poor? Instinct says to pick the Chiefs for this one, but the historic results tab tells me they haven’t won an away match against the Waratahs since 2007! After last week, I’m going with my gut. Chiefs by 6

The Waratahs finally got a win in round five, but it was far from convincing against a sloppy Lions outfit. The Chiefs would not want to suffer back-t0-back defeats by Aussie opposition. I am backing the away side. Chiefs by 13

The Canes have won nine in a row against the Blues, but the Auckland side has just returned from a successful tour of South Africa where they beat the Bulls and became the first team to topple the Stormers this season. That travel, though, must take its toll and with the Hurricanes fresh off a bye, the smart money is on the home team here. Hurricanes by 9

The Hurricanes smashed the hapless Sunwolves while the Blues caused a big upset by steamrolling the Stormers at Newlands. This will be another good NZ derby, but I think the Canes will sneak it. Hurricanes by 12

Having won away at the Highlanders last week, the Rebels start as favourites against the Lions, who still haven’t got going yet this season. The Rebels have never beaten the Lions before, but if they are as good as last week – and if the Lions are as bad – this should be their first victory. Rebels by 9

The Rebels claimed a good win against the Highlanders last weekend and will be full of confidence when they host the Lions on Saturday. The Lions look a very average side this season and I expect them to suffer another big loss. Rebels by 15

The Sharks had a great tour and now have a run of home games to cement their position after winning three of four matches on tour. Despite the travel, they should be favourites for this one at home against the Jaguares. Sharks by 8

This could possibly be the match of the weekend as two contenders in the South African conference battle it out in Durban. The Sharks had a fantastic tour while the Jaguares claimed a comfortable victory over the Bulls. These two teams love to give the ball air and I am expecting a high-scoring affair. Yes, the Sharks did travel back, but I am backing them to continue their good form. Sharks by 10

This is a tough one to end the round, featuring two teams that have just one win between them this season. I’m always tempted to pick the Bulls at home, but they were disappointing last weekend, plus the Highlanders have won on their two most recent visits to Loftus. Highlanders by 4

The Bulls were very poor against the Jaguares while the Highlanders suffered a defeat by the Rebels. Two very poor teams and it may come down to which team makes the least mistakes. The Bulls must bag one sometime, right? Bulls by 6

The Boks faded in the second half to slump to a 22-17... END_OF_DOCUMENT_TOKEN_TO_BE_REPLACED

Performing in empty stadiums will be a key factor in the series... END_OF_DOCUMENT_TOKEN_TO_BE_REPLACED

Rassie Erasmus and Jacques Nienaber are experts at finding solutions to tricky... END_OF_DOCUMENT_TOKEN_TO_BE_REPLACED

SARugbymag.co.za identifies six of the best and worst foreign players to play... END_OF_DOCUMENT_TOKEN_TO_BE_REPLACED

As highlighted by the Argentina controversy, ‘cancel culture’ needs a spoonful of... END_OF_DOCUMENT_TOKEN_TO_BE_REPLACED

The problems at Western Province Rugby are layered, and everyone involved needs... END_OF_DOCUMENT_TOKEN_TO_BE_REPLACED

After a massive exodus of players the Vodacom Bulls will be eager... END_OF_DOCUMENT_TOKEN_TO_BE_REPLACED

For the Boks to emerge as World Cup winners, they need to... END_OF_DOCUMENT_TOKEN_TO_BE_REPLACED
VIEW MORE